Australian Magician Jackson Aces is a master in the art of illusion and magic.

Called “The BEST in the Biz” on Channel 7’s Morning Show Australia, Jackson’s world class magic tricks amaze even the most skeptical audiences. Hiring magicians or entertainment for an important celebration can be stressful, so if you’re looking to hire a magician Sydney, save yourself the stress and choose the best…

In order to make the most of every event, performances & packages are custom tailored to suit your needs. Depending on factors like the purpose of the event, audience size, venue, and budget, packages are curated because one size does not fit all.

If you’re seeking magician hire in Sydney NSW, look no further! For over 15 years, Jackson Aces has been helping corporate event planners & private clients create magical moments that guests rave about for years to come! 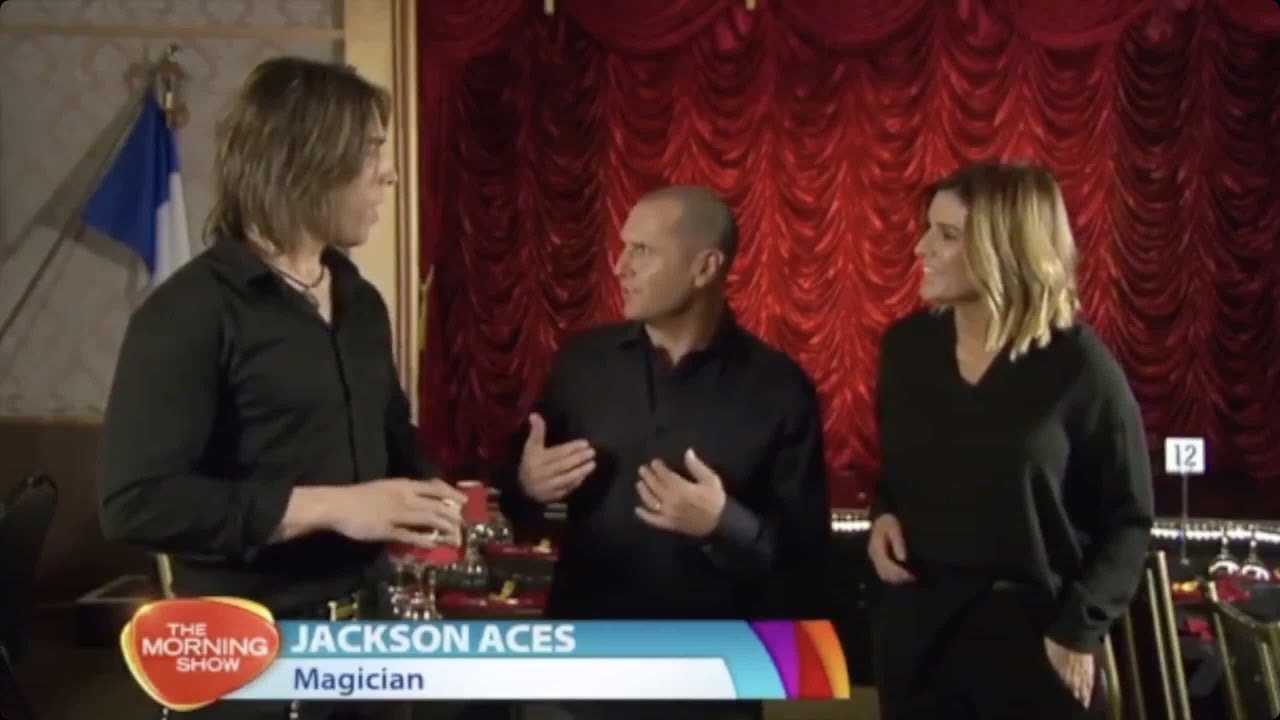 Roving magic is up close, personal, and the perfect icebreaker to create conversation & engagement. Jackson will stroll throughout your event and bring people together, performing the type of impossible magic you’ve only seen on TV. Guests are entertained in small groups by the magician – creating an intimate and personal experience where everyone feels included. Strangers soon become friends and have a much better time at your celebration.

Trained by one of the world’s best magicians in Las Vegas, Jackson performs tricks which no other Australian magicians perform, such as predicting the name of a loved one, “guessing” people’s phone numbers, making objects disappear in the audience’s hands, and without a doubt the best card magic in Australia.

Roving Magic at Your Event

A roving magician will break the ice and can easily slot into most events. We highly recommend roving magic entertainment for a:

Why Hire a Roving Magician in Sydney

The key benefits of close up roving magic entertainment are as follows:

Roving magic can easily fit into your business event, private party or wedding at the drop of a top hat! Give everyone an amazing shared experience to talk about. Choose Jackson Aces to be your roving magician in Sydney and your guests will thank you for it – guaranteed!

Need a magician for your next event? Enquire now and see Jackson Aces and his master cardistry and roving magic.

Jackson Aces' magic has been blowing the minds of millions of people around the globe. He has over 4 million followers online such as TikTok and many celebrity endorsements.

Penn Jilette, Of Penn & Teller: Fool Us
"I'm blown away!"

Shane Watson, Australian Cricket Captain
"You have to tell me how you do it!"

Michelle Bridges, Celebrity Trainer & TV Personality
"That has FREAKED me out!!"

Teller, Of Penn & Teller: Fool Us
"Wow! Your sleight-of-hand is very advanced."

Mark Bouris, Millionaire Businessman
"Usually I don't like magicians, but you got me good! I'm impressed."

Kyle Sandilands, Radio Personality
"What the hell!! That's weird... I want to come to your magic show."

There is lots of audience participation, with special tricks involving all members of the audience, as guests literally perform the magic together, from their seats. Everyone will feel like they’ve become a magician and are part of the show, without the need to join the magician on stage.

Volunteers who do come on stage become the stars of the show and are treated with courtesy and respect. Guests love seeing friends and co-workers on stage with the magician, having fun and joining in on the action. Your colleagues will thank you for giving them such a special experience.

The show is designed to bring out hilarious moments of involvement, where volunteers make the audience laugh with them, and are always glad they were part of the performance. Your guests will appreciate you choosing a professional magician who cares about making everyone comfortable while having a great time.

Give your team something they would have never seen before and hire magician Jackson Aces for your virtual or hybrid event. A pioneer in virtual entertainment, Jackson was the first Australian magician to create interactive magic online, with many of his virtual illusions going viral, receiving over 1-billion views views and gaining him 4-million followers.

2020 changed the world of the Sydney magician, with the need to quickly adapt as online entertainment became the norm.

Can a magician do tricks through Zoom?

Well, Jackson has since been performing virtual shows for corporate audiences across Australia (and the world) to overwhelming applause. While most magicians simply do tricks to the camera, Jackson’s show is specifically designed to personally involve all members of the audience, all while delivering the company message. It’s a great way to get the team working together, especially Jackson’s exclusive presentation The Magic of Teamwork.

The Magic of Teamwork Virtual Show

Each staff member is sent a care package allowing them to perform miracles in their own hands, all together as a team, from anywhere in the world! This package can be customised to feature your brand logo, products or message, creating the perfect memento for staff to then keep on their desks as a reminder of the experience and the magic of teamwork.

This unique presentation facilitates team building, camaraderie and delivers the powerful message that teamwork creates magical results. This engaging, interactive and motivating keynote can also be customised to include your company message in a way they’ll never forget.

Add some classy, sophisticated entertainment to the most magical day of your lives! This is the ideal celebration to hire a magician Sydney. Awkward silences and nervous small talk disappear as guests unwind and make lasting connections through an engaging, interactive show.

The True Love stage show takes the focus off the magician and onto the everlasting love of the newlyweds. This fun wedding presentation combines incredible illusions with a heartwarming theme. It concludes with an astonishing climax made possible through the magician involving every member of the audience. This has brought many audiences to tears and with a memory they’ll cherish forever.